Another consequence of pancake bonding is that π-stacking intermediates can be stabilized by them as illustrated above.

Statistical analysis of thousands of crystal structures containing π-stacking interactions was done using geometrical criteria based on diagrams as shown above. This analysis provided new insights into the packing energetics of TCNQ radical anions. A significant term is obtained by the bonding interaction of the singly occupied molecular orbitals of the TCNQ radical anion as illustrated below: 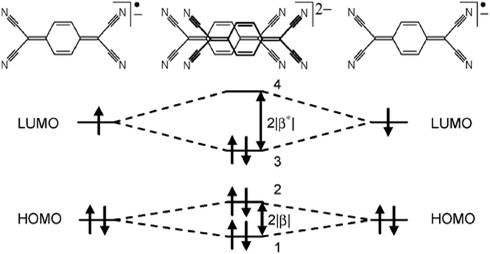 The energy gain associated with the stabilization of the SOMO (the LUMO in this case) is governed by the favorable overlap between to adjacent molecules with significant π-π overlap. At the same time, larger overlap provides for more electron delocalization between repeat units which is essential for electrical conductivity. Similar principles can be applied to the recently discovered neutral radicals based organic conductors from Robert Haddon’s group. An orbital diagram for those compounds are shown below which is the basis of interpreting our calculations on a number of properties of these promising organic conductors. 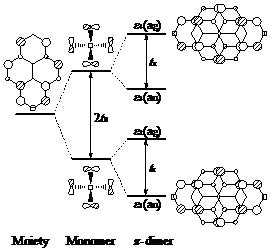 The diagram below deals with a molecule where the p-p overlap occurs between two π-systems within a single molecule providing a testing ground for methods and ideas concerning SOMO-based p-stacking interactions. 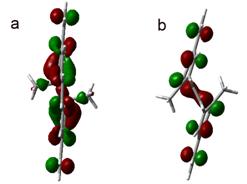 A stepped one-dimensional Kubo π-chain of molecules excised from the crystal structure with interplanar separation of D = 3.14 Å. The antiferromagnetic coupling is illustrated by ellipses (intra- and intermolecular couplings are indicated by horizontally and vertically oriented ellipses, respectively). Orbital interpretation of these systems provides an overall accurate and predictive picture including geometry, energy gap, optical and magnetic properties. These insights are pivotal in designing new organic based conducting and magnetic materials.