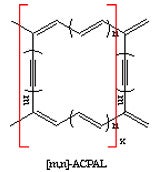 The search for intrinsically low band gap conjugated polymers has been of great interests in the last two decades. This is a first rate scientific challenge that holds various promising properties. The reduction of the bandgap increases the thermally available charge carriers and increases conductivity possibly leading to an “intrinsic” electrical conductor without oxidative or reductive doping. Stable reductive doping which would be enhance with small bandgaps can also help designing supercapacitors, which are a form of short term energy storage devices. In this project we follow various strategies for bandgap reduction.  Two examples are listed above, there are others as well.  In the first two investigated the possibility of the overlap of the p-electrons from one pitch to the next.  Generally, these overlaps are either too weak or do not have the right phase for bandgap reduction.  In the second example parallel rungs of the ladder a couple sufficiently strongly and in the correct phase such that a significant bandgap reduction occurs.  We are looking for chemical variations on these themes and related systems in the search for significant bandgap reduction.