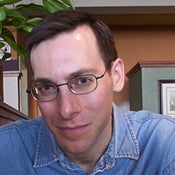 The research in my group is decidedly interdisciplinary, involving aspects of chemical biology, biophysical chemistry, and surface chemistry. The three specific areas in which we work are: small molecule binders of intrinsically disordered proteins, macromolecular crowding effects focused on nucleic acids and protein-nucleic acid interactions, and engineering of protein-surface interactions.

Natively unstructured or intrinsically disordered (ID) proteins are common in eukaryotes. Proteins with ID regions are often associated with regulatory and signaling pathways implicated in the development and survival of higher organisms. Approximately 60% of human cancer-associated proteins are predicted to have unstructured regions of ≥50 consecutive residues. Interactions with ID proteins often involve a folding transition of the disordered region; these coupled binding and folding events lead to highly specific but relatively low affinity interactions. The ability to chemically interfere in the functioning of ID proteins would be a valuable tool in elucidating their biological roles, and might provide lead molecules for medicinal chemistry investigation. Recently, we described the mechanism by which small molecules induce the coupled binding and unfolding of the Myc-Max bHLHZip heterodimer. We were able to determine the specific interactions between the small molecule inhibitors and the unfolded c-Myc monomer (c-Myc is disregulated in many cancers, and requires dimerization with Max for its function) and have begun to understand how small molecules can bind with specificity to their counter-intuitive, unstructured targets. We are continuing work to understand what ID sequences may be targeted by small molecules and working with Ed Prochownik of the Children’s Hospital of Pittsburgh in continuing to develop Myc inhibitors with increased affinity and efficacy.

In the second area, macromolecular crowding, we seek to address the following fundamental question: What are common (if not universal) physical-chemical characteristics of the intracellular environment that modulate the activity of small molecules and biomolecules in this environment as compared to typical experimental conditions? Excluded volume effects, or macromolecular crowding, are universal factors in all cellular systems which can contribute substantially to the energetics and kinetics within these environments. Although there is much past and ongoing work in this area (especially in protein folding), my group has focused on systems for which there is little data such as noncanonical DNA duplexes, higher order DNA structures, and the rich but virtually unexplored area of effects on RNA structures. We are also interested in the effect crowding has on the binding of transcription factors to DNA and their ability to discriminate between specific and nonspecific DNA

We are developing methods for the direct, stable, genetically-encodable attachment of proteins to metal nanoparticles and surfaces. These methods would allow the point of attachment to be genetically engineered into the protein, and provide control of the orientation of the protein on the gold surface. The goal is to allow chemisorption of proteins, while suppressing physisorption, and thereby provide a means to uniformly orient proteins on NPs. This ability would facilitate the creation of multifunctional NPs (NPs with multiple functional proteins attached), and improve the activity of proteins used in biosensors and other applications.