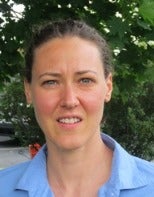 Our group is broadly interested in self-assembly processes, phase formation, and structure-property relationships in f-element materials. All projects have a significant synthetic component and involve the characterization of new materials. Current research areas include:

Our group is developing new synthetic strategies to access crystalline mixed lanthanide-transition metal oxide based materials that are targeted for their promising spectroscopic and magnetic properties. Areas of research include the synthesis and design of inorganic and hybrid organic-inorganic frameworks and supramolecular assemblies, structure elucidation, characterization (spectroscopic, magnetic, thermal behavior, etc) and correlation of structure property relationships.

Our group is also examining the interactions of the early actinides (Th, U) with biochemically and geochemically relevant functional groups. We are exploring the speciation and structural chemistry of actinide-organic ligand complexes in solution and the solid state using spectroscopic techniques, a number of synthetic methods, and solid state structural characterization including single crystal and powder X-ray diffraction. We are interested in correlating the solution species with those observed in the solid state as this can serve as a basis upon which to build a fundamental understanding of the chemical behavior of the actinides. Of particular interest are precipitation, complexation, and redox reactions that occur in aqueous solution and under the influence of functionally relevant organic ligands. Such insight into the coordination and reactivity of the actinides has important implications for the transport and fate of heavy elements in the environment.